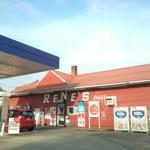 The place was a “cow watering pond” on the recently abandoned Pratt Farm just north of Milton High School on Arrowhead Avenue. The Pond and surrounding property was acquired by the Lindsay family in 1966. After snow shoveling, the family began to skate on the pond every winter. The ice was never a problem during those cold winters of ‘66/’70. It wasn’t long before the neighborhood kids got wind of the pond activity and came over to skate. Hockey started with a half dozen players and eventually grew to a dozen or more. With snowbanks piled high around the pond edge it was easy to lose the puck in the snow so water was sprayed on to freeze the natural “boards”. The next problem was the lack of nets so some neighborhood dads constructed them out of chicken wire and two by fours one for each end. Except for frequent ice clearing it was game on. The skaters would visit the pond weekdays after school and just about every weekend. A trestle bench in the Lindsay home’s entry way was used to put on skates and the bench with skate blade marks are still part of that “hockey” history.  With winter daylight at a premium it soon became evident lights on the pond would be a welcome addition. An electric cord attached from the house serviced a half dozen 100-watt bulbs strung around the pond and night skating started.

Over a lunch break at work the word got out that there were about a dozen Milton boys who were playing hockey on pond ice. R.L. Valley and Bob Ashton offered Jack Lindsay and Ron Jordan to bring the Milton boys to Saint Albans to skate and play at Coots Arena. Their reply was “But our boys range in age from 6 to 15 and we don’t have enough players to form an age group. “That’s OK was the reply just put them all on the same team”. And so the fledgling Milton Youth organization began evolving into A and B teams of 6-14 year olds. Referees, coaches and facility managers were most welcoming to the newly formed Milton teams. The first team shirts were simple white “T” shirts followed later on by the red, white and green shirt colors still worn by Milton players today. The original colored shirts (the only shirts in stock) came from Bedford, Quebec. The shirt logo, a circle with an arrow through the name Milton, was designed by Pat Hall, a hockey mom, using some equipment available to her at work. The team colors were also knitted into stocking hats for each player by another hockey mom Jackie Perry. The first Milton players had family names of Bushey, Stewart, Jordan, Lindsay, Biral,  Laskowski, Thompson, McLane, Lauziere, Bean, Smith, Hall, Ladue, Lewis, Trombly, Abel, Brisson, Drake, Francis, Phinney, Perry, Barch, Manley, Sovay and several of their dads acted as coaches. In 1975 we fielded a girls team (Donlan, Regan, Phinney and others) and for a while we even entertained kids from Cambridge and Winooski because they had no programs. A “C” team consisting of kids just learning to skate (i.e. Matt Raftery) were schooled on Leddy’s patch ice. The Milton boys’ home rink was Coots Field in Saint Albans and they were soon invited to join the Border League consisting of teams from Frelighsburg, Bedford, Quebec, Highgate, Missisquoi, St. Albans, VT and Plattsburgh, NY.  We were also fortunate to have MHS’ Athletic Director (Jim Carter) agree to provide funds for our Bantam goalie equipment because that team, in reality, was the High School’s Junior Varsity.

Official win/loss records were not kept but the Milton Youth Hockey boys remained competitive throughout their careers. The first season in the league (72-73) the “Atoms” were winless but the next year they won the league championship. Several went on to play for Milton High School and MHS was the Div II state champions 1979-80; runners up 1980-81, state champions 1981-82 (undefeated and unscored upon in the playoffs!!); 1982-83 saw the lads move up to Div 1 and advance to the quarterfinals that year.

Milton Youth Hockey from its beginning on “The Pond” provided and still provides a valuable recreational outlet for Milton youth and yes, female players are now part of the roster. The pond still provides skating and a swimming hole during the summer. Probably the most important thing the Pond represented was a social gathering place for kids of the community and many remember the early days and the teammates they played with. The founders are proud of the fact so many Milton youngsters grew up in the program and believe that what started on “The Pond” contributed to the present MHS program and memories that will last lifetimes. Many, who are now adults, still, with fond memories, comment on the days they spent playing hockey on the “Pond”!